At the end of the night, it was hard to tell I was at a pre-tournament meeting for a crappie tournament. I mean, most of the talk was about catfish and gar. The catfish were caught at Catfish Charlie’s, the main menu item for the dinner for participants in this weekend’s American Crappie Trail Ouachita River Open.

You can catch the weigh-in for the big pro tournament at Forsythe Boat Dock at 3 p.m. Friday and Saturday. The winner after Saturday’s final weigh-in will receive a new fully rigged Ranger Boat worth close to $30,000.  About that much more in cash and prizes will go to other top finishers.

The tournament is presented by the ACT, Lucas Oil and the Monroe-West Monroe Convention and Visitor’s Bureau.

And oh, yes, about the gar. Apparently the gar have been moving in on minnows on angler’s lines which were intended for crappie something fierce this week. It was especially true for fishermen focusing on shallower water areas and those anglers from states further to the north that don’t have as many of these teethy critters as we do. 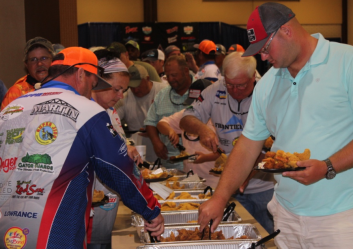 Tournament fishermen get their limit of Catfish Charlie’s delicacies

Other than that, with so much on the line, the fishermen from all over the country were as tight-lipped as the crappie would be after an early fall cold front. Some truth came out around the dinner tables which were holding the nearly 70 teams that will be going pole to pole with each other the next two days.

First, fishing is tough. The river has fallen and the water temps are high. Second, the bigger fish that were everywhere a few weeks ago have suddenly become scattered, or they aren’t as hungry they have been. Third, there are lots of fish being caught up Bayou D’Arbonne but unless you get off of the channel and find some good ones, there is going to be a lot of boat traffic to contend with.

Finally, from what I could gather, a seven fish stringer weighing 11 pounds or so on both days  of the tournament might just put you in a new boat. But then again, there is always that case of sandbagging. Maybe someone’s on them and isn’t talking. No, surely not…

You can’t find out right here, right now, but you can later this weekend. It will be worth a trip out to the weigh-in to find out. In the meantime, it will be a super busy weekend on the river. Be safe. Be courteous.

« “Locals” to watch in the ACT
Stewarts dance into ACT lead »