The American Crappie Trail is about to begin ACT 2, the second year of competition on the new professional crappie trail. The first of six regular season events is set for Neely Henry Reservoir March 16-17. The second one is right down the road on Ross Barnett Reservoir in Jackson April 20-21. If you are wanting to qualify for the national

championship next spring, this one’s a good one to pick up some  points in without having to travel far.

Founder and ACT spokesperson Matt Morgan is excited for the tour — and for our area. If you are a crappie fisherman (or have any economic interest in this area), you should be, too.

“Louisiana is going to have a big play in 2018,” Matt says. “Everyone needs to get ready as a championship berth will have to be earned.  There are going to be some close tournaments in proximity to North Central Louisiana.  We also have some innovative things in store for 2018.  Everyone needs to be on the lookout as we are going to try and grow the sport of crappie fishing.  Wherever you fish, come give an ACT event a try you won’t be disappointed in the experience!”

The 2018 American Crappie Trail doesn’t have a regular season tournament on Lake D’Arbonne, but it does have one on the Ouachita River. And when this year’s circuit is complete, the best of the best WILL come to D’Arbonne for a first-of-it’s-kind national championship in the spring of 2019. Make no mistake about it folks. Our area is very fortunate to be included in these events and we all need to work hard to keep them here. They can go anywhere, but they like it here. It’s our responsibility to help keep them coming back. The financial impact on this area is huge and not just during the tournament. The promotions and publicity about fishing here throughout the year bring fishermen from around the country and they spend big bucks in Lake D’Arbonne Country.

The ACT has some of the most stringent rules of any pro crappie circuit. If you plan to fish, check them out on the ACT Facebook page or at

“I am one of the those guys that is always looking to be better and improve on what we have.” Morgan says. “Some of the highs for ACT so far include being recognized as trying to bring conservation into the sport of crappie fishing.  It’s also pretty nice being one of the most professional trails in the business and actually having lakes and Convention & Visitor’s Bureaus contact us for future events.”

Matt feels that one of the steps he and ACT have taken to even the playing field is really paying off. That is having anglers register early and setting an off-limits period before tournaments on the lakes. “The most successful thing so far for us is actually having teams signed up before practice starts! Also, having an off limits period for a more level playing field is important. Those are two big ones,” Morgan says.

The new idea of a spring Championship following the annual tour has also been a high spot for him.

“I have had so much positive response about the 2018 Championship on D’Arbonne,” he said. “The anglers are stoked to be fishing in the spring of the year for a championship! Also, having a 3 day event with a cut after day 1 and 2 is a real hit!” 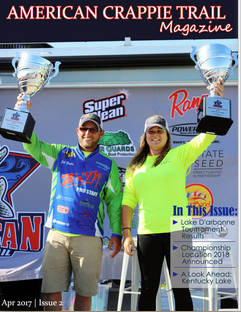