Editor’s Note:  Happy Father’s Day Weekend. We will be back with you on Tuesday, June 27. We are taking a little time off to let the keyboard cool off, charge out batteries, put new line on the reels and clean the smushed crappie bites out of the boat carpet. Be safe…and stay tuned.

I originally wrote and published this article in the News-Star on Sunday, June 19, 1988. My parents are both gone on to be with the Lord now, but I never lost the love for live and for fishing that they gave me. I hope you enjoy reading this and are able to still tell your Dad “thanks” on this Father’s Day weekend. Now I’ve been blessed again, this time by my children who both have kids of their own. And I’m getting to relive a lot of my memories through seeing them do the same things.

There’s nothing like a grandson or granddaughter calling “Here Fishy Fishy Fishy…” off the boat dock or screaming — “look what I caught”… So this is for you Evie, Emma, William, Stewart & Jack! 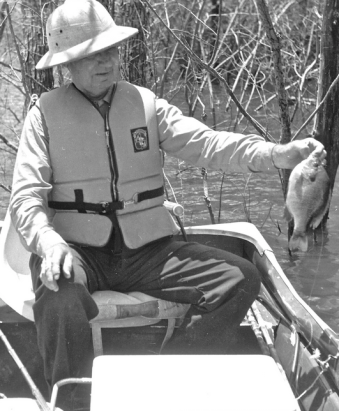 Thanks for taking me fishing and hunting. And thanks for putting up with the times I spooked the fish and hooked the stumps and hollered “I wanna go home” right when the fish started biting. And just as important, thanks for teaching me that catching a limit or getting a good shot isn’t why we hunt and fish. It’s the time we spend outdoors that counts. You taught me to respect the wildlife and fisheries resources we have. Without that, fishing and hunting are a meaningless pursuit…  Thanks.

Since today is Father’s Day, I think it appropriate for me and all the other guys and gals whose Fathers started them out with a cane pole and a can of worms or a .410 shotgun to say a word of thanks.  I’ve been fishing with my folks since I was big enough to remember. I guess the first trips were up to Irvin’s Lake in northern Morehouse Parish. We had to get up at 4 a.m. and drive to the lake in darkness so that we could get there in time to rent one of the few boats available in those days.  If you got there too late, you fished off the bank and went home early. If you made it in time to get a boat, you got to fish all day for a dollar.

Times have changed a lot since then, and so has fishing. There days you can’t rent an 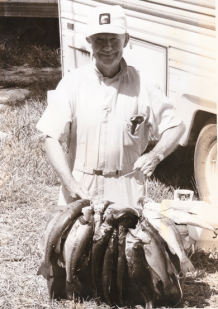 aluminum boat, but since Dad and I both have our own now, it doesn’t matter. We have enjoyed countless days on the water and many of the good memories don’t come from catching lots of fish, but some of them do.

Dad is basically a bream and white perch fishermen. I caught bass fever at an early age and neither of us ever wavered. However, we did compromise enough to fish for each others favorite species every once in a while. One day on an area lake we were catching quite a few big white perch. In those days, I was writing a regular fishing report in the newspaper. I had written that the big white perch were tearing it up on this particular lake. Dad and I had caught about 40 and the ice chest was nearly full. We eased up on another boat, and the fishermen didn’t look too happy.

“Doing any good”, Dad asked, as fishermen usually do. “No, we haven’t caught a fish,” the man replied. “I read in the paper that they were tearing it up here, but I guess that guy didn’t know what he was talking about.”

Dad couldn’t stand it. He eased his foot on the trolling motor and moved the boat over beside the other fishermen. “Take a look at these,” he said.  The other fishermen gawked. They couldn’t believe it. Then one of them recognized me and we all just laughed.

It was also always a tradition of ours to go to Toledo Bend and spend a week camping and fishing. In Toledo Bend fishing, bass always came first, and I was able to convince Dad that he should give them a try. Usually I convinced him by bringing in a good stringer to get him a little bit more motivated. One day we were fishing with a friend and I had spent the best part of the morning trying to teach him how to fish with a plastic worm and to be able to tell the difference between a fish hitting the worm and the worm hitting a log. I kept telling him it wasn’t like bream fishing where they just grab it and you catch them. He hadn’t had much luck. We were fishing an old log pile and I had caught a couple of small ones when he turned to me and said we needed to move the boat back because he was hung on a log. Well about that time, that old “log” started moving, shaking that plastic worm for all the big lunker was worth. So much for having just the right feel and for setting the hook like a pro. That fish was hung and Dad was in for some fight. He finally landed the seven pounder several minutes later and it was the biggest fish anybody in the campground caught our whole vacation.

I could go on and on, as many of you could when talking about the father, uncle or neighbor who took the time to teach you the basics and then encouraged you to pursue outdoor sports on your own. In doing that, they gave you something to do for a lifetime – something you can do with your friends, by yourself of even later with your own kids. I can especially relate to that now because my own son, Adam, and daughter, Julie, go with me now. My son’s first “real” fishing trip was several years ago, and I’ll never forget it. We were to get up early and go before the sun was even up and stay all day. I helped him lay out all his stuff and tucked him in. But before I could get settled in my own bed, the light in the hall came on and here came Adam — fully dressed, including hat, life jacket, sunglasses and all.

“Dad, if it’s okay with you, I’ll just sleep right here by your bed so you won’t forget me,” he said.  How could I say no? And as for Julie, I can’t even try to tell her that hunting and fishing are just for the boys. She enjoys it as much, maybe more than they do.

So when they spook the fish and hang the stumps and holler “I wanna go home” right when the fish start biting, I’ll try to remember what I’ve been taught. Thanks, Dad.

“Train up a child in the way he should go; even when he is old he will not depart from it.”