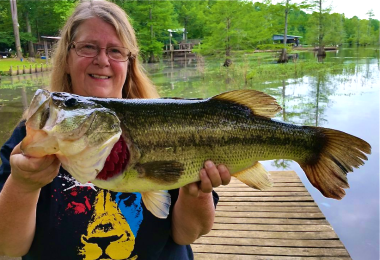 Beverly caught this 24 inch, 11.74 pound largemouth bass this week from Lake D’Arbonne. What was really cool was it was her first time fishing from her kayak. Little boat. Big fish.  After weighing it and taking pictures, she released it back into the lake. Awesome! I’m sure we’ll hear more about this in the days to come.

She shared the photo and story on her Facebook page. Congratulations! 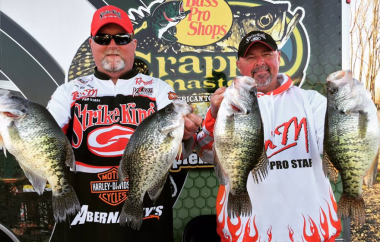 And here’s more news…. There was a time when if you got on television, it was really something special. It still is, but with the revolution of social media and the addition of three million different channels to watch, it isn’t as captivating as it once was.

Nevertheless, it’s still exciting to a see a friend on the big screen. One of our good friends, Lake D’Arbonne, will be on TV this Saturday as Krappie Kings shows “Fishing on Lake D’Arbonne” at 1:30 p.m. on the Sportsman’s Network.

The show footage was filmed during the Crappie Masters tournament on the ‘Bone in 2016. Host Karl Kalonka  of Canada and his partner Tim Blackley of Tennessee finished third in the tournament with a two day weight of 26.72 pounds

Host Karl Kalonka loves D’Arbonne and he is quite popular around here with those who know him.  I expect it to be worth watching and a great promotion of the lake and area. If you won’t be home, set your DVR and record it. If you love the lake or fishing, you’ll be sorry if you don’t.

As a guy who’s done a little marketing and PR work in his life, I do get a kick out of one of the promos for the show (and other TV offerings), saying the show “will reach over 30 million homes in America”.  What that really means is that the show is “available” to 30 million homes if they subscribe to the cable package offering the Sportsman’s Channel. That means that many people could actually turn on the TV at that time and turn to that channel…

Being a dog who is never too old to learn a new trick, I’m going to apply this same concept to promoting lakedarbonnelife.com !!!  Henceforth, I will refer to this website as “reaching 3.2 people around the world”.  That is the estimate of how many people actually have internet access around the world who could turn on their computers right now and read this right along with you! How about that!

Hear all that clicking? 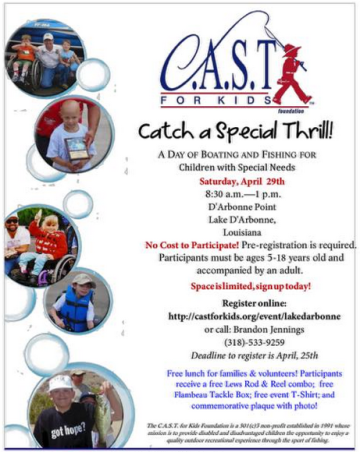 And finally, don’t forget this Saturday’s C.A.S.T (Catch a Special Thrill) tournament on Lake D’Arbonne at D’Arbonne Pointe. Weigh-in will be at 1 p.m.

« Youth whopper contest
A fish story as big as the bass! »