A show of hands

Class is in session at Crappie U.

Crappie are the new bass.  That’s what “they” say and I agree. At one time, there were more bass fishermen than crappie fishermen. They spent more money, had more gear, fished more tournaments and got most of the attention. That’s changing. But I don’t sell the bass anglers, short. They are still out there in big numbers, too.

As Master of Ceremonies at Crappie University in Bossier City, one of my jobs is to kick off each session and get all eyes and ears of the “students” on center stage for the presentations. Last week, I asked the audience of around 250 fishermen how many were former bass

As we call class into session for week three Thursday night, hosted by Bossier Parish Community College and presented by Bobby Garland Crappie Baits, here are a few things I’ve learned in the first two sessions. First, some great reminders from Jay Stone and John Godwin, the first night’s presenters. They made six  points in their closing remarks that we all need to remember: 1. Nothing is more important than time on the water.  2. Practice with techniques and lures you have confidence in.   3. Learn to try new things as well.  4. Talk to other crappie fishermen and learn from them.  5. Never waste a crappie.  6. Always be courteous and safe. That makes you a success whether you catch one or 100.

Fishing pro Barry Morrow from Missouri was the speaker the second night and he gave much of the same type advice as keys for fishing success.  Have Confidence. Have Patience. Show willingness to adapt. Be Persistent. Practice, practice, practice. And just fish.  Learn what you can, then go fishing. That’s the most important part. Pay attention to what is working and repeat it. Pay attention to what is NOT work and don’t repeat that.

That’s Crappie 101 in a nutshell so far. 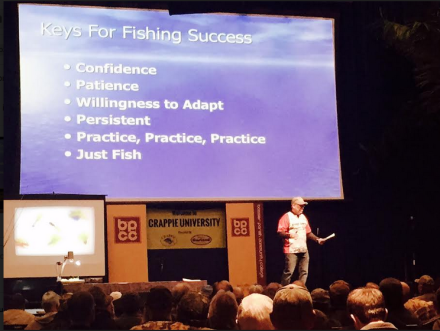 « All eyes on the ‘Bone
Crappie happiness; crappie madness »