Bass still on the bite

We’ve gotten some good reports of success from bass fishermen this past week, despite  not-so-good water conditions on area lakes. Several big fish and good stringers have been caught out of D’Arbonne and a couple of tournaments this past weekend on other lakes show they’ve been hitting there, too.

Kel’s Cove on Lake Claiborne was rocking Saturday as 25 teams of the top bass fishermen in our region lined up head to head in the Major League Fishing qualifier on the big lake south of Homer.

When the final whistle blew, it was Charlie Worthington and Dillon Murphy in first place with 20.66 pounds for the day. Coming in second were Tyler Lewis and Collin Merrett with 19.75 followed by Greg Terzia and Jeff Pipes with 16.10. Rounding out the top five were the teams of Kenny Covington and Lee King with 16.07 and Jerry Silmon and Schyler League 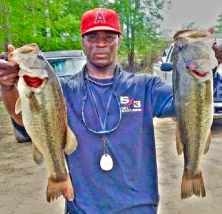 Those were some impressive catches, especially after last week’s lake conditions.

Heavy rains in the Homer area caused Lake Claiborne to rise to 187.15 during the week, putting the tournament in jeopardy. Normally the lake closes at 187.00 feet. But the lake fell enough to go ahead with the event, much to the dismay of about 100 pounds of largemouth bass caught during the event.

Relax, though. Most of the fish were released back into the lake to enjoy the muddy, high water….

Over on Black Lake Sunday, Sontus Mitchell and his partner Jordan Ellis landed 20 pounds to win the North Central Bass Club tournament there. Sontus is shown above with their two biggest fish. Nice!

If you’ve got fishing tournament results you want us to share on lakedarbonnelife.com, just email them in with a digital photo to darbone1@gmail.com