A hen and two poults

John Hanks spends more time talking turkey than most. That’s because it is his job. As Private Land Biologist Supervisor for the North Mississippi Alluvial Valley area with the Louisiana Department of Wildlife and Fisheries, he keeps up with everything turkey in a 12-parish area around Monroe. Based on information that he and others in Louisiana have collected over the past 12 months, he says the outlook for the coming turkey season is good. That is based on poult (young turkey) counts from the past year. Turkey season in our area opened this past weekend.

“Our poult counts this year showed that, for the most part, the poults per hen (PPH) count was around 1.7. Average is 2.0 or better,” Hanks said. Poult counts are done over the summer by volunteers, LDWF professionals and people on the roads a lot (like UPS drivers, postmen, etc.). They make notes every time they see turkeys. They aren’t totally accurate, but give a good overall picture.

There are good areas for turkeys and bad areas. And there are great areas, too. The map below shows the reported turkey kills from last year. Not all turkeys killed are reported, but it gives a good picture. Dry parishes with lots of woods are obviously the best turkey areas. You’ll notice that Union and Claiborne are right up there at the top!

The good news is that the long, wet winter hasn’t stressed turkey populations. There was a bumper crop of acorns this year. There was also a mild summer last year that gave an ample supply of berries, nuts, seeds, insects and other turkey foods. So there’s a good chance that  the poult count next year will be better.  For regular reports on this year’s turkey season, you can click on the Simmons’ Sporting Goods ad on this page and go to their Turkey Report. 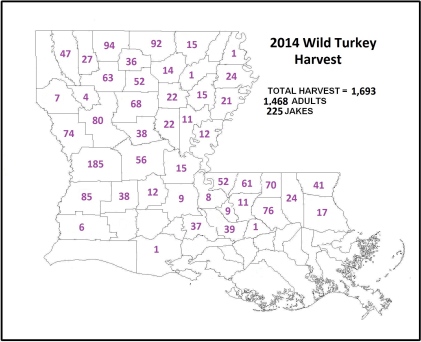