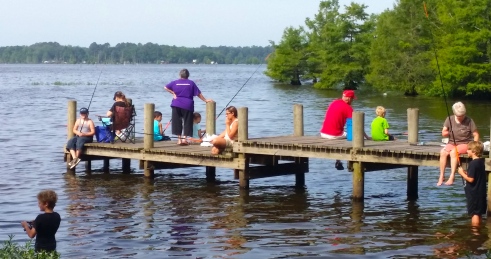 Recently the Louisiana Department of Wildlife and Fisheries in conjunction with the Lake D’Arbonne State Park held a free fishing day for kids on the fishing piers at the park. A big crowd turned out and quite a few good fish were caught. Thanks to these two groups for putting this on — and to the parents and friends who brought youngsters to take part. Here’s the lowdown, courtesy of Zach Bounds of the LDWF:

“On Saturday June 7th the Louisiana Dept. of Wildlife and Fisheries Wildlife Division/Education Section, in partnership with Louisiana State Parks, hosted their annual Lake Darbonne Fishing Rodeo. The event was open to the public, with a great turnout. There were a total of 60 kids, parents not included, from Farmerville and surrounding communities in addition to families visiting the state park that attended the clinic.

We had two events that day, a fishing tournament and a bait casting competition. Awards were given to the kids who caught the most fish, the biggest fish, and who had the best casting accuracy. All the kids entered in the Fishing Rodeo received a fishing pole courtesy of state parks. Other prizes included tackle boxes, baits, rod and reels, and much more donated by Academy Sports and Armstrong’s Cricket Farm.  One boy and one girl were drawn randomly as winners of brand new bicycles donated by Academy Sports.  All the bait, crickets and worms,  for the fishing tournament and equipment for the Fishing Rodeo was provided by LDWF education section and Louisiana State Parks provided water for kids. It was a great turnout and even the kids who did not win the tournament walked away with a fishing pole and hopefully a new or better love for the outdoors.”