If Lake D’arbonne were located in Winn Parish, folks in Farmerville would likely have never heard of Brandon Jennings. He would have just stayed home to fish.

Brandon is from Winn Parish and is the founder of the Bayou State Crappie Assassins. He and most of his members have an affinity for fishing on Lake D’Arbonne. It’s enough to bring Brandon to town on a regular basis. And it gave him the idea to write to Karl Kalonka, host of Krappie Kings, about a new cable fishing show dedicated to catching crappie and highlighting crappie fishermen.  He invited him to Lake D’Arbonne. Kalonka took him up on it and Brandon coordinated getting significant financial help from local groups, primarily the Union Parish Tourist Commission. 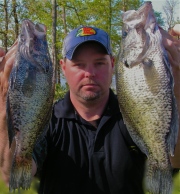 Jennings also spent a week of his personal time making sure the fishing show folks got where they needed to be, had some excellent guides lined up and even made sure they had plenty to eat and do when they weren’t on the water. The local community was absolutely fantastic in helping out. The only bad part of it is that footage shot the past couple of weeks won’t be turned into a show and be on air until next spring.

I’m not sure who Brandon works for, but his boss ought to give him a few extra days off this summer for the fine community work he did.

The Assassins had their first tournament in November and 30 members fished it. The group has grown to 60 members in six months and is still growing. If you want to contact Brandon, comment on the Bayou State Crappie Assassins Facebook page.

“The important thing about the club is we focus a lot of promoting crappie fishing here at home in north Louisiana,” he said. Brandon is not only putting on tournaments, he is attending expos and seminars and is finding out crappie fishermen have some pretty strong numbers. They are second only to bass fishermen and are growing at an even faster rate. In recent years, crappie fishing is not only an older gentleman’s sport, but it is being picked up by many young people and families. The tournaments are set up to be fun and not with a lot of hard to follow rules. But one thing more than any other is making crappie fishing pick up lots of new participants:

Brandon laughed. “I used to be a bass fisherman and in those days crappie fishing was mostly with a cane pole and a shiner. I liked bass fishing because of the chase, because of feeling the fish hit. Today, we have an array of crappie equipment and the growth of jigs, plastics and other lures that lets you feel the fish hit (it’s the “tap”…told you) makes it have an added element of excitement.”

Brandon got introduced to that when he changed jobs and met some of the “new breed” of crappie fishermen. Artificial baits, rods that actually said “crappie rod”, etc… He was hooked.

“We want to help grow the platform for new crappie fishermen to associate with established crappie fishermen,” he said. “We want people to be able to share ideas, tips and techniques and grow the sport. Most crappie fishermen just fish one of two lakes, too. We want them to get out of their comfort zone and realize that they can go other places and catch, crappie, too.”

Keep up the good work, Brandon.