Fishing reports here lately are about like the weather. Pretty good one day. Pretty not the next.

This past weekend was a great fishing weekend. There were probably more people on the water Friday through Sunday on D’Arbonne than I’ve seen in quite a well. Then Wednesday, following the cold front and another dip into the low 30’s, it stopped again. In fact, for the first time since the temps were in the teens, I did not see a single boat on the lake below Hwy. 33 Wednesday. I’m not sure how cold it got early  Wednesday morning, but the little digital temperature gauge reading on my truck’s windsheld kept bouncing between “32” and “ice”…

Fishing up same up the creeks was the same as the big lake on Wednesday – slow. In talking with Terri Towns at Lester’s on the Lake at the Hwy. 2 bridge, she pretty well echoed the same reports for the week.  I don’t know if the fish were still biting or not, but I bet they were glad to get some relief from the fishing pressure! There were a handful of fishermen up Corney Creek and one of them who had a nice mess of fish gave me a fishing report that is worth remembering: “They’re usually biting somewhere for somebody.”

The next few days things should pick back up for more fisherman. It will be increasingly warmer through Saturday, but according to which “whether”man you listen to, it is probably going to rain Saturday or Sunday with some thunderstorms. Enough of that, here’s a fishing report:

White perch are still in the channels because of cold water temperatures on Lake D’Arbonne, especially in the south and middle areas of the lake. Some white perch are moving shallow in the upper reaches of the creeks and shallower areas and are hitting shiners and jigs. A few good crappie have been taken on yo-yo’s. NOTE: Remember to follow the new yo-yo regulations on the lake. No devices can be attached to any artificial poles, sticks, etc. If you have any doubts, check the LDWF regulations web site or on the Louisiana Outdoor News portion of this website.

Most people catching fish in the channels are fishing 14-20 feet deep and using slow-moving jigs. A few good catches are reported on shiners.  When the fish take a notion to bite, it doesn’t seem to make any difference on the color. When things slow down, smaller jigs in gray, shiner colors with black, blue or pink seem to work best. Fish slow.

Some good catches of smaller bass are reported up the creeks as well. Action on the big lake has been slow. Fish should be moving up for the spawn in the next couple of weeks. No reports on bream or catfish.

Lake Claiborne is still producing some good catches of white perch in deep water with one of the most popular areas right out in front of the dam area. Fish are deep here, too, hitting 14-15 feet deep in 20-25 feet of water. Some fish are also moving shallower on the north end in the coves.

Fishing on the Ouachita River has been slow. Some white perch were caught in the bayous and deeper river lakes last weekend on shiners. Fishing seems best out in the lakes instead of around shore. Many anglers must be looking forward to catching some redfish and speckled trout in the Ouachita River near Monroe in the coming weeks. They may be migrating up from the Gulf of Mexico once they realize that the DOTD put out 300,000 pounds of salt in our District a couple of weeks ago to keep roads and bridges from being iced over. Okay, seriously, redfish and specks aren’t coming up here, but most of that salt did end up in the Ouachita. Before you go looking for a fish kill, consider this. Fisheries 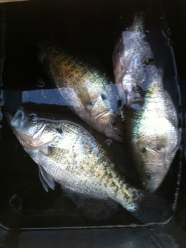 biologists will tell you that salt in those amounts has no negative effect on fisheries and in some ways, increased salinity actually has a positive effect on fish populations. Of course, too much salt could stress fish, but that didn’t happen here.

Plus, if you catch a good mess of fish close to the bridges in the next couple of weeks, you won’t have to add as much seasoning to them! Okay, yes, now I’m kidding again. I have to explain a couple of these kind of things to my SUMO friends.

Caney Lake is producing some good catches of white perch. Fish are deeper and jigs are working best. Poverty Point Reservoir is also producing good catches of white perch and some nice bass. Both are a little behind where they normally are this time of year, but it’s just a matter of the temp getting right in the next few weeks. The best way to get a good fishing report is to hook on the boat, bait up the fishing pole and go find out for yourself. Who knows. You might just be the somebody that they are biting for somewhere….

« Fishing for Hope
Big ones “hit” up Corney »