Listen to the preacher’s motor

Our little hump in the swamp, circa 1984

Fishing forays fall under one of three categories — prizes, consolation prizes or surprises. On occasion, you end up in one more aptly categorized in the end as a “booby prize”.

Sorting through some old files the other day, I found one labeled “Easter campout 1984”. Inside were some notes, a few black and white photos of us catching and cleaning big bunches of catfish and bluegills, living in a tent on a small island (okay, it was a hump in the swamp) and enjoying the good life. A prize of a trip for sure. I still remember it like it was 25 years ago.

But let me further unwrap this package before we attach a final prize label.

We were heading to the Atchafalaya Basin for a four-day spring camping and fishing excursion. We were roughing it. We had an eight man tent, sleeping bags, two big cast iron skillets, three miles of rope and a grocery sack full of Crisco (the fore-runner to peanut oil), cornmeal, potatoes and onions. The ice chests were full of ice, ten pounds of bacon and six dozen eggs. We also had several cases of Dr. Pepper and water. That was about it, other than fish bait, trotline hooks, poles, bobbers, lines and sinkers. And some cans of Deep Woods Off.

We watched no AccuWeather forecast. There were no cell phones. We didn’t even have a map as we headed off for the manly adventure. Like Columbus, we were just looking for high, dry land. We even had a preacher with us, although he threatened to turn around and go home when we stopped at The Sportsman Quickie Pack for sausage biscuits and coffee.  I celebrated my way with a Dr. Pepper and a link of boudin. The preacher basically said I wasn’t right, and scribbled some written notations in his little black  prayer list booklet.

But off we went. A couple of hours later, we loaded gear in the boats, put in at a tiny landing off Belle River, and prepared to head off to find a good place to camp. All was going well, but then…

The preacher’s outboard motor wouldn’t start. We had at least six expert mechanics who knew about everything from tapping on it with a screwdriver to blowing WD-40 into the fuel intake to get it running. It didn’t work. We had about a two mile boat ride into the swamp to camp. The boats were too full to tow one, so the preacher just loaded up and went home. We made sure he didn’t keep any essential things like Dr. Pepper or the mosquito dope before he left.

You know what that was? A sign. A real life sign. Divine intervention. We should have been paying more attention. When you go off on a wild outdoor adventure and the preacher’s motor won’t crank and he goes home — you should go home, too.

In a nutshell, the next day was great. We caught a ton of nice catfish and bream and cleaned them right on the bank not far down from where the boats were tied up at camp. We had a great night’s sleep. The next morning, we got up and ate a big breakfast and took our time. We already had almost enough fish to fill up our ice chests. But when we headed down to the bank, one of the guys yelled, “Look at that big water moccasin! Shoot him.” I pulled out my trusty .22 caliber pistol and hit him right in the head (okay, I was only four feet away).

“No, I mean that one over there.” Boom. Boom. And there were more. One of

the other guys grabbed the 20 gauge and dispatched two more. The more we shot, the more seemed to wiggle down out of the brush. We dispatched some of them, too. Before it was over, we had killed 11 snakes and run off about 1.5 million more. They were feasting on our fish cleaning scraps. Pretty stupid to put them that close, I know now. At least the gators must have fed during the night while we were sleeping.

Then the sky started clouding up. Wind started blowing. We went out and ran our lines, caught a bunch more fish, took up the lines and headed back for camp. Our fish to ice ratio was about it the max. It became apparent that fishing was about to get tough anyway and we might even have to cut our visit short. We did fire up the skillets and fry up some marvelous fish, fries and hushpuppies. About mid-afternoon, a commercial fishermen pulled up to the camp and basically told us in his best Coach O game voice that we better get out of there. There were tornadoes coming that night. Guys that live in the swamp almost never talk to outsiders. The fact that he took time to do it made us realize it was going to get bad if he was worried about us.

So we tried to pack up. But before we could even load up and take down the big tent,  the north wind was churning up waves way too big for us to head back out across the big lake. So we hunkered down on our hump in the little bayou. And remember that three miles of rope? I think we used it tying everything down, even the boats. I’ll never forget two things from that night. One, the crazy wind filling our tent with air like a balloon and then the sudden poof of the tent deflating during a glorious lightning show. The wind and pressure were doing a number on that tent. But it held. And two, there was my former brother-in-law, who came with us even though he thought a rugged day outdoors consisted of 18 holes of golf after work. He “slept” wearing his yellow slicker suit and his life jacket, humming gospel tunes after tying himself to a big tupelo gum tree beside the tent.

Morning brought sunlight. And somewhat calmer waters. The night had been so bad, there weren’t even any snakes anywhere. We loaded up and headed home. We later found out that tornadoes and terrible winds had claimed the lives of several people in the area that evening and night, two in a boat trying to cross the very lake we were camped out near. And there we were, sleeping in a tent on a hump in the swamp. We did have enough sense to call the wives from the neighborhood Cajun Mart when we first got back to civilization to let them know we were okay and headed home. It would have been a shame to survive that night outdoors only to be taken out by the bottom of a cast iron skillet back at home.

In all these years, I’ve never shared this story in print, but I feel it is my duty to finally share this lesson with other outdoorsmen. To make a long story short . . .  and hear me out on this one: 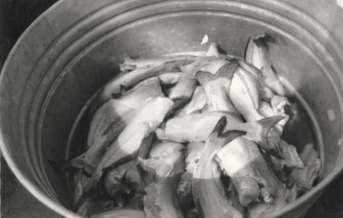