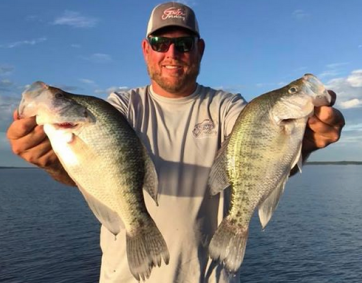 The hashtag ending on the American Crappie Trail Facebook page Thursday morning pretty much said it all for ACT founder Matt Morgan:

When Morgan started up the American Crappie Trail, his vision was the create a crappie trail that would showcase the professionalism of crappie fishermen and the products of the crappie fishing industry with tournaments providing big payouts.

This weekend, when the ACT finishes it’s 2018 regular season on Grenada Lake in Mississippi, there will be 121 boats on the water and the event will culminate with a payout somewhere in the $80,000 range, the largest regular season crappie tournament payout ever.

“This is what we want to be about,” Morgan said. “We are showcasing what professional crappie fishing should be about. I am truly, truly excited about this tournament and what’s ahead. We have a lot of national sponsors here and a great turnout of fishermen. This isn’t a mom and pop sport anymore.”

There is a large contingent of 318 anglers at the event. Some have already qualified for the prestigious ACT National Championship to be held on Lake D’Arbonne next spring. Others are scrapping for the final points needed to get them there.

There’s a lot more at stake for these teams than trying to get a slice of this one $80,000 Grendada crappie pie. The top 100 boats at the end of this season will be qualified to fish in the National Championship on D’Arbonne March 28-30. The only way to get there is to qualify. That event will be the biggest fishing tournament ever on D’Arbonne and will be a boom to the economy of the entire area for years to come. Not only will the fishermen spend live wells full of money, but they publicity garnered from such an event will be brings people to the lake from all over the country for years to come.

“We try to schedule our events on lakes where people can have fun and where they can catch fish,” Morgan says. “If they are going to spend their hard-earned dollars and valuable time, we don’t want to take them somewhere that isn’t fun or where they can only get three or four bites.”

And speaking of bites, for the first time since I’ve known Morgan, I called him Wednesday afternoon and had to call him back. Why? He was out fishing. He doesn’t get to do that often anymore.

Morgan has won several crappie fishing championships, but he laid his jig poles down to start up the ACT circuit. He never fishes on the same waters as a tournament, but he took a few hours to run up the road to nearby Enid Lake and caught a mess of crappie Wednesday. Thursday morning, he recapped his trip like this:

“I went up to Enid because it was a short trip and it kept me off the tournament waters,” he said. “It was a perfect day and we caught lots of fish. It’s good to know I’ve still got it and can still catch them. I’m not as good as I was, but I don’t think it would take me long to get back in the saddle.”

« We will never forget
Start the day »