This isn’t your daddy’s crappie fishing

If you’ve ever put a shiner under a bobber or dropped a jig on a line under a cypress tree for fun or supper, this should get your attention. If you have ever thought about putting your crappie skills to the test against the best of the best for big cash and merchandise prizes, this should also get you headed to your piggy bank to round up some entry fee money.

The big news?  The American Crappie Trail is coming to the Ouachita River out of Forsythe Boat Dock June 22 and 23. The last day to sign up is June 17 at 9:00pm. Anyone can enter. It’s not cheap, but the prizes justify the entry fees and more. You can follow ACT on Facebook or go to this site for more details:  American Crappie Trail

And if you are just a fan of fishing, it would be smart to set your smart phone to remind you to be at Forsythe Park at 3 p.m. that Friday and Saturday afternoon. You won’t regret it. You’ll probably be shocked to see the size of fish caught on the river, especially for this time of year. The ACT goes to great lengths to make the weigh-ins exciting and informative. The pros are always nice and willing to talk and it’s just amazing to look at some of their rigs and gear. Plus there are always a lot of giveaways for attendees.

So how did one of the premier professional crappie tournaments end up on the Ouachita River in June?  It started a couple years back when the ACT held a tournament on Lake D’Arbonne. The continued enthusiasm led to the 2019 ACT National Championship being set for D’Arbonne in the spring of 2019. But there needed to be another tournament in our area as a qualifier, but not on the same water. Enter the Ouachita River.

“The idea was derived from a group of local anglers who fish the D’Arbonne event and they told us about the fantastic crappie fishing on the Ouachita when it’s stable,” says Matt Morgan, founder of the ACT. “We did a little research and found that stability was best in June, so that’s why we are coming here now.”

“Our tour fishermen are excited to come and fish here,” he continued. “It’s a great fishery and the facilities are just fantastic. The folks at the Monroe/West Monroe Chamber and Convention and Tourist Bureau are great to work with. From a fisherman’s standpoint, it is so convenient to have hotels, restaurants, bait shops — everything — right within a couple of miles of the fishing waters.”

On the line for anglers will be points toward qualifying for the National Championship at D’Arbonne. But for the winning team here, there’s a new $26,000 Ranger Boat! The rest of the payout is based on the total number of anglers, but in the last event second place was over $7,000 with third and fourth receiving almost $4,000. Payouts on the Ouachita should be in the same ballpark if not larger. This isn’t your daddy’s cane pole crappie fishing for sure.

This tournament doesn’t come without a unique set of challenges for anglers, though, especially for visiting pros who haven’t seen the waters before and are used to fishing big reservoirs and lakes. Mapping shows bayous, sloughs, bottom countour, everything on a body of water. That isn’t available for the Ouachita River.

“Mapping has become one of the most important tools for crappie fishermen who travel from area to area,” Morgan said. He knows because he’s a former national championship crappie fisherman himself.  “Finding a set of reliable maps allows anglers to look at the entire body of water and see where crappie fishing should be the best before they even put their boat in the water. The mapping we have on our electronics on our boats today does that for us. The Ouachita River is one of the only bodies of water you’ll ever see a big event like this on that hasn’t been mapped for fishermen. You may see river lakes or water bodies along the river on a regular map, but you don’t know if you can get into them from the river or not without going and trying each one. That takes a lot of time.

“That makes this tournament kind of a throwback tournament. The fishermen will just have to study what they can on Google Earth or other maps that show the body of water, then put their boat in the water and go fishing,” Morgan said. “It’s going to be interesting.”

While some touring pros may have an advantage over locals in equipment, techniques and overall experience in different conditions, the fact that you can’t get that technological aid like on most lakes gives local and area anglers a bit of an advantage.

The tournament waters are off limits June 8-17. That, in turn, evens things back out a bit. If you are interested in entering, the absolute deadline for entering is 9 p.m. the 17th. No one will be allowed to enter after that. No exceptions.

Fishable waters are from the I-20 bridge to the south all the way to the Felsenthal Lock and Dam to the north, including Bayou D’Arbonne.  You can put in at any public ramp in the legal fishing waters BUT where you are fishing HAS TO BE reachable from the main channel of the Ouachita. If you are in the tournament and have any question, make sure you have that cleared up before the event.

Single poling, long-lining, spider rigging, jig fishing, double minnow rigs — they can all catch fish on the Ouachita River this time of year, so it should be an interesting tournament. This event benefits our entire region. The Union Parish Tourist Commission and the Ruston CVB also played a part in getting ACT to the area to begin with. They all deserve a pat on the back for seeing the value of this to our region.

There are also a lot of interesting stories around the tournament trail. We’ll cover some of those for you here and we’ll start with this one.

One of the leading fishermen on the tour this year is 16-year old Drew Morgan. Drew is Matt’s son and fishes with Matt’s old partner, Kent Watson. They are the Lucas Oil sponsored team. Matt obviously can’t compete in tournaments that he puts on, but his son slipped right in his spot and his making him proud. Kent and Drew finished fifth in the last ACT tournament on Kentucky Lake and are third in the Angler Team of the Year standings. They have already been down to the Ouachita catching crappie earlier this summer. The recent photos of Morgan and Watson on the river before the off limits period gives you an idea of what to look for from them and from others in the upcoming tournament.

“He’s a really good fisherman and he’s grown up fishing for crappie, bass and bream and he’s been doing well,” Morgan said of Drew. “I sat out in a photo boat watching him on Kentucky Lake and it brought tears to my eyes watching. I’m a proud dad, that’s for sure. It seems like just yesterday he was a kid sitting there at the kitchen table with his baseball cap on backwards, eating a pop-tart. Now he’s out there fishing professionally and holding his own with the best of the best.” 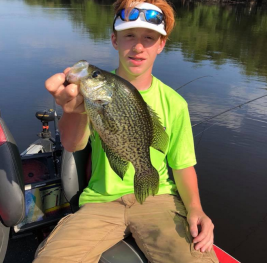