Phillip Haynes and Paul Alpers of Missouri won the 2017 Crappie Masters Nationals on a chain of Mississippi lakes this past weekend.  They were in eighth place after Day One. The duo caught 14 crappie over the two days weighing 21.89 pounds. That’s $30,000 in crappie money by the way, plus product and sponsor bonuses.

Richard Bowling and Gary Lee finished second with 21.50. Ironically, none of the top ten finishers caught a crappie over two pounds on Lake Washington. Because there weren’t a ton of big fish caught, the tournament was extremely close.

“It always comes down to making the decisions and adjustments, Crappie Masters President Mike Vallentine said of the closeness of the weights and the changes in standings from day one to day two. “The fishing changes everyday so you have to adjust. It could be water depth, speed, colors, or location.”

Our area was well represented in the competition. Fishermen from our area caught lots of fish, but had trouble cracking the top 10 with the big ones.  Wes Barmore and Mark Theodus were 20th with 19.00  pounds. Jason Thomas and Scotty Johnson were 28th with 18.35.  James and Chuck Morgan were 33rd with 18.13. One of the top teams and only “sponsored wrap team” in Louisiana, Terry Richard and Casey Rayner had a tough day on Day Two and slipped to 77th in the event. That shows how tough the competition was. Richard and Rayner won the Louisiana State Championship on D’Arbonne last year.

“Almost local” fishermen Steve and David White of south Arkansas finished fifth in the tournament with 20.62. They are regular fishermen on D’Arbonne. They made the choice to fish Lake Chicot, a family favorite.  Steve’s father (David’s grandfather) passed away a few days before the tournament, but they made the decision to go ahead and fish – and do it on Chicot. Our condolences to the Whites. The are truly nice guys and great fishermen. Here’s what David Shared on Facebook:

“My Dad loved his Crappie fishing and from the time he could hold a pole till he got married David spent nearly every weekend growing up on Chicot. There were several times during the tournament when he said out loud, “Papaw send us a big one”! It was hard to look at his cabin as we trolled by it dozens of times but David insisted we fish Chicot and go for the win.”

There was another group of fishermen that got some special prayers and recognition at the tournament. Even though they might not have had property affected directly, there were several fishermen from Florida and Texas that could not be there due to damage in their states due to the hurricanes.

“Our thoughts and prayers go out to the ones affected from the hurricanes and we hope to see them next season,” Vallentine said.

Chuck Morgan with a whopper gar. Neither he nor JC would admit which one caught it…

One final tidbit: This tournament may have set the record for the number of gar caught in a crappie tournament. Several anglers reported catching 20-30 gar a day, including some mighty big ones. Do gar and crappie run together? Here’s what Vallentine had to say. “It is very common to find gar and crappie together. They are chasing the same bait fish. It happens to be a larger factor in the river system because they are hanging out in the oxbows out of the current. It congregates them together.”

“Other fish” are often know to congregate in the same places as schools of crappie. At D’Arbonne in the spring when the fish move from the channels to the flats, it isn’t unusual to go through as many shiners on catfish bites as it is crappie.

You can get all the details of the tourament on the Crappie Masters page online at:

Here’s a gance at the way the fishermen finished the event: 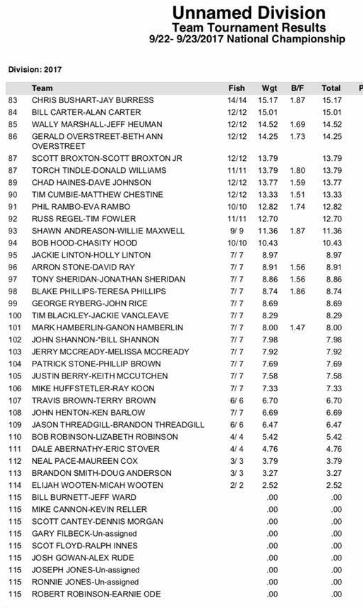 You’ll recognize a lot of these same names next spring when Crappie Masters returns to Lake D’Arbonne for fourth stop of the 2018 tour:

“We are locked and loaded, ready for 2018. It begins in a couple weeks with a tournament on Lake Carlyle in Carlyle, IL. This is the first event for the 2018 season,” Mike said.  2017 was a successful season with an increase in participation and memberships. We are looking forward to promoting this great sport and the entire industry as we move forward.”