Union slips to No. 2

Last year was an unusual year for deer hunters. Some parish deer hunters reported good harvest success while others were way below normal, even in seeing deer. After checking with deer processors, it was the same thing. Some were up, some were down. The bottom line is there is really now way to know exactly what went on, but it made for some good conversation.

One thing we know for sure.  Union Parish has long been No. 1 in reported deer harvest, but the parish slipped to No. 2 in the official rankings for the 2016-17 season, according to the LDWF numbers.

Vernon Parish had 3,414 deer reported harvested while Union was second with 3,085. The question is, did all the deer killed get reported, as required by state law? No one knows the answer to that, either.  Some people may not want to report their kills for a variety of reasons, including the fact that they don’t want more hunting pressure here because too many people hunt already. But if that is happening, it could lead to lower limits and shorter seasons if deer harvest numbers continue to wane. That has already happened in two deer areas in the state for this season.

My advice? If you kill a deer, report it like you are supposed to. And no matter where we rank, this is still a mighty dad gum good place to deer hunt, whether the deer like to come out in the daytime or not… 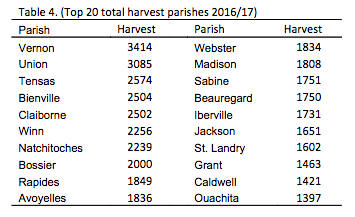