Wow. If  this country would have expended the energy and come together toward some good and worthy goal that it put toward Monday’s eclipse, there would be at least a couple of major problems solved.

I kind of feel like the biggest eclipse of all Monday may have been the intellectual eclipse of sanity, slowly blotted out by the dark orb of insanity.

I did see a sign. A sign that too many people have too little to get excited about in their lives.  So just call me the Eclipse Buster. Move along, people. Nothing to see here. Shakespeare would h ave said in comedic mode, “much ado about nothing”.

I didn’t risk watching the event with my old eyes, but did turn on the NASA channel for a few minutes. I was greeted by two bubbly announcers explaining the intricate astronomical details of the eclipse, but two minutes in, they couldn’t get their microphones to work. Oh, Heavens.  Then they switched to someone in the field in Oregon who was interviewing a five-year old who said, “I’ve never seen anything like it.” At five, I doubt she had. Another lady, who looked like she was about to pass out, simply said, “Awesome…Beautiful…” then she ran out of words before getting to a “C word.

It got better. They cut to a team of giddy scientists in the NASA Gulfstream III airplane, who confirmed that they could actually see the darkness from the eclipse move across the earth below them like a shadow. I did some brief research and have been able to determine it indeed WAS a shadow (this, without government funding) !!!

They showed the people painting the cows with glow in the dark paint so they could observe their movements in the darkness of the eclipse, then people with aluminum foil on their heads. With TV casting a dark shadow over me, I decided to go down to the boat dock and go fishing. 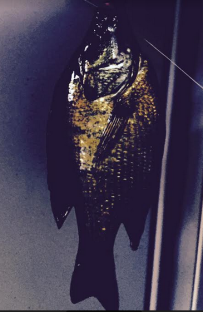 I was hoping it was going to get a little bit dark because I’ve never been bream fishing in the dark. But it didn’t.  I must admit it was eerily still. And hot. At the near totality of the eclipse, the fish did start biting. I even caught what I’ll call an eclipsaperch, a weird dark crappie-looking almost black colored bream. I thought about having blackened perch for supper, but threw it back just to be cautious.

I almost didn’t report all this, but since it was an outdoor event, I felt compelled to do so.

I’m sure that the following years will be filled with multiple class action lawsuits against the “safe” glasses that everyone wore. I’m can just imagine the Dr. Phil III TV show in 2054 where adult after adult parades onstage and says, “My life was ruined by watching the eclipse.” If we still have TV.

I laughed as I read on Facebook that a new Social Media record would be set with viewing, sharing and commenting. I really laughed. Then I realized I was on Social media myself. And now I’m putting it on my blog.

My apologies to all your science nerds out there.