How about we go try to catch a 10 pound bass?

“I don’t think so. Thanks for asking”

Well Randy, let’s go eat a big ribeye steak and a lobster, how about that?

“Well I would, but I’m frying up some whole fried bream for supper. Can’t beat that” 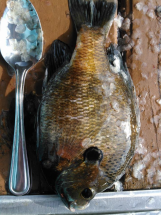 Okay, that conversation didn’t really happen exactly like that, but it could have. Anybody that knows Randy would recognize at least part of that scenario. Randy’s not only a heck of a nice guy and good fisherman, but he’s also a humble volunteer who shies away from the limelight, but never the change to help someone. That was never more apparent than during last years floods when we worked nonstop for weeks on end with the Hometown Heroes organization. But when he needs to rewind, there’s only one button to push.

” I love to bream fish,” says Randy. “I’m a type ‘A’ personality and I’m wide open 99.9% of the time. Bream fishing is a sedative for me. It’s like relaxation. I don’t have to think about anything else. Just sit there and watch that cork go under and just be at peace and at ease.

“And you are right, I love to scale them and fry them up and eat them right out of the lake,” he adds. “That’s about the only kind of fish I like to eat.”

« What is that down there?
Fitting for Mother’s Day »