Now, it’s time for the real deal. Nearly 200 of the best crappie fishermen from this area plus top professional fishermen from more than a dozen states hit the water Friday morning for Day 1 of the Louisiana State Championship presented by Crappie Masters. It’s a big deal. At stake? Nearly $40,000 in cash and prizes. And points toward the cash-heavy National Anglers of the Year race.

And even though the crappie fishing has been “off” from what it was a bit earlier, don’t surprised if all these talented anglers don’t turn it back “on” the next two days. If you have time, come to the weigh-ins daily Friday and Saturday at D’Arbonne Pointe. Anglers have to be in line by 4:30 p.m.  If you are on the water, take extra time and show these guys some courtesy. It’s a special time for them and let’s give them their due. It puts Lake D’Arbonne on a national stage in a very positive way.

Anglers were more tight-lipped that a spawning crappie after a blue northern cold front Friday. We asked defending champs Terry Richard and Casey Rayner of West Monroe what they were doing.

Things got off to a fun start Thursday with a special Media Day and Celebrity Fish Off. Here’s how it went. 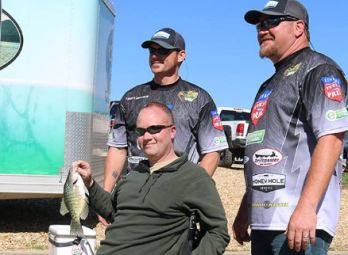