Student Anglers off to fast start 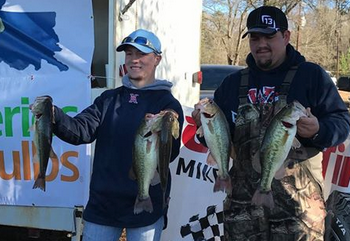 Cason Womack and Bradley Koonce from Quitman were second with 11.93 followed by Wesley Banks and Hunter Israel from West Ouachita in third with 8.43. For their efforts, the winners took home $500 for first and $180 for second place big bass. The runnerups won $300 for second and $200 for big bass plus another $100 bonus donated by R&R Heating and Cooling. Third place paid $200.

Hayden Hester and Mason Chipman of West Ouachita were fourth with 7.12; Slade Netherland and Chris Theriot from Weston were fifth with 6.44; Will Taylor and Will Alexander from West Monroe were sixth with 6.30 and Trenton Cantario and Haiger Lawson from Haughton were seven with 5.55.

The winning teams were all glad to share how they caught their fish.

“We knew that the wind and high pressure was gonna affect the bite,” Kolb said of the first place team. “Some more than others. We felt like we could get bit on a shallow pattern but we knew that if we could get bit offshore that it would be the quality that we wanted. We caught most of our fish in the 15-20 ft range on a football head jig off of a point.”

Taylor added that they caught about 15 fish during the course of the day. And that he was going to spend his part of the winnings on a couple new reels.

Cason Womack said this of the runnerup team.  “We started on a rocky bank up the lake throwing crawfish color rattle traps (first fish caught was biggest) and black and blue jigs. When the bite slowed we headed to the other side of the lake and it was very windy. We picked up a few more fish then went into a little cove without any wind. We didn’t get a single bite so we said I guess we will have to fight the wind and finished our limit like that then culled one fish.” He also said that he plans to buy a new rod with his winnings.

“We caught all of our fish on a green pumpkin jig on docks and out of brush piles,” Banks said of his team’s catch. “We focused more on docks in depth ranges in 8-10ft of water and brush piles in 10-15ft. We caught most of our fish in Beaver Creek and Kel’s Cove. Weather conditions effected our pattern because the water temp dropped 6-7 degrees from the week before which caused the fish to move out off the docks a little more and move into deeper brush piles and the ends of the deeper docks. The cold front put them into a funk which made the bite a little slower but we ended up catching 15-20 fish throughout the morning and after lunch the bite slowed down.” Wesley also wanted to thank his parents for everything they do to make sure he is able to fish these tournaments.

One duo that should have won the “Never Give Up” award was Cantario and Lawson. Their outboard wouldn’t start, so they just started fishing close the ramp and not only caught fish, but won prizes and were one of the teams to catch a five-fish limit.