What about the lake?

The hot topic around Farmerville is no longer politics. It’s the lake.

“What about the lake?”

As in, what are the plans for closing the gates and trying to let Mother Nature fill up Lake D’Arbonne after the quadrennial (every four year) drawdown.

Lake Commission member Steve Cagle confirmed today that the plan is to close the gates on December 15 and “let her fill up from there”.  I for one, can’t wait.

The 2016 drawdown began on September 6th and was extended from the original close date of Nov. 15 for a month to Dec. 15 by the commission, apparently at the request of the LDWF. If it takes another four to six weeks for the water to come up, that will make it one of the longest drawdowns if not the longest I can remember – 23 to 24 weeks or more.  It certainly gave folks plenty of time to make any needed repairs and since it was a light year for grass anyway on the lake, most of it should have been exposed to at least three or four good frosts and killed back. The biggest threat of all – giant salvinia – that is showing up in some of the northern reaches of the lake, will be killed back some by the frost, but almost nothing kills all that stuff.

Drawdowns are necessary and helpful in many ways, but they also take a hit on the local sporting goods related economy. A lot of folks like me that usually spend money every week on fishing have had their boats on the trailer for those 20+ weeks. The lake looked “full of fishermen” on many days because a couple parking lots were full, but less than half of the lake’s ramps were open, which made it look more crowded than it really was. And the fishermen were concentrated at the two big bridges. And nobody with boats in their boat house could get on the lake.

During a drawdown, rental properties, even the state park, see a sharp rise in vacancy rates. Some tournament groups moved away from the lake during the drawdown. And the annual Crappie.com gathering that usually attracts more than a 100 money-spending fishermen from the region had about 30 people for their four-day gathering this November.  I talked to at least a dozen big bass fishermen who weren’t willing to put their $30,000 bass rigs in jeopardy running the “maybe it is, maybe it isn’t” channel.  It’s something to think about when planning and extending drawdowns. Or we can just keep doing things “the way we’ve always done” like the people who still walked after the wheel was invented.

There are about as many opinions about the lake drawdown as there are colors of crappie jigs. One thing I would like to see is more public and business involvement in these decisions. But no, I don’t really know how to do that either. Any suggestions should be given to the lake commission members. Be nice about it. Remember, they are volunteers who try to do the best they can for the lake.

The chart below shows the recent lake level as of Monday morning. We’ll need a lot of rain to bring the lake back up nearly five more feet to normal pool of 80 feet. But with a big watershed, hopefully it won’t take long if we get normal rainfall through December and January. Did I mention I can’t wait. 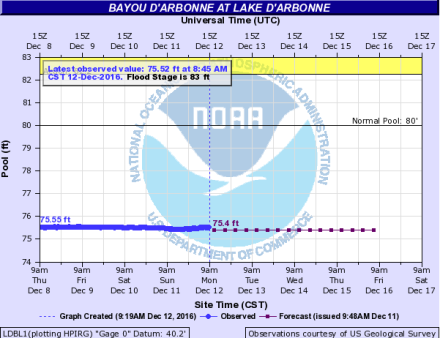