Matt Morgan and Kent Watson won $33,000.00 as champions of the Crappie Masters National Championship on Grenada Lake in Missisippi this weeekend. They landed two seven fish limits for a total of 26.43 pounds to claim the top prize.
One hundred and ninety teams from around the country fished the event.

West Monroe crappie anglers, and winners of the Louisiana State Championship here on Lake D’Arbonne this spring, Terry Richard and Casey Rayner finished 14th in the tournament. They had 14 fish weighing 23.16. The only other area fishermen in the top 50 were James Morgan of Rocky Branch and Chuck Morgan of Natchitoches with 14 fish weighing 20.94.

Crappie Masters will return to D’Arbonne in late February of 2017 for the state championship. You can find extensive coverage and lots of photos of the Nationals on Crappie Masters’ Facebook page: 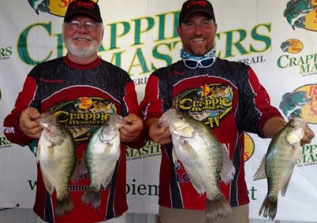