If you want to know how long it took Dennis Bratton to win the King of King’s crappie division, just bite into a raw jalapeno pepper and wait for the burn. Yep, about three seconds.

“I dropped the jig by the first cypress tree we came by this morning and it hadn’t hardly settled in the water when I felt the ‘thump'”, Bratton said Saturday afternoon. “We caught several good fish, but that was the only female and she still had eggs. That’s why she weighed over two pounds.”

She weighed 2.16 pounds to be exact.That was a $750 “thump” as Bratton claimed first place and a four-foot trophy for the championship. Jerry Silmon caught a 1.78 for second place and also took home a check for $250.

Martin Hines caught a 5.66 pound bass to win the King’s Bass division with Wiliam Moore coming in second with 5.46, winning $750 and $250 respectively.  Hines caught his winning fish on a Brush Hawg. Fishing for both species was off from what it had been the past few days, largely because of the cold front that had the temperatures right at 40 degrees at daylight Saturday morning.

“It was a bit nippy for sure,” Bratton said. “I think it slowed down the bite. They weren’t aggressive, but we still caught lots of fish.

The tournament is sponsored by the Union Chamber and put together by Brandon  Jennings with Bayou Crappie, ETC. One of the coolest things about this even is that tournament sponsors team up with Donnie Vocker and Hunters for Heroes to arrange host fishermen to take almost 20 vets fishing. They have a great time, get to fish with some of the best local fishermen and get to enjoy some good Union Parish hospitality. The weigh-in was held in front of a good crowd enjoying the great Spring weather at D’Arbonne Pointe. 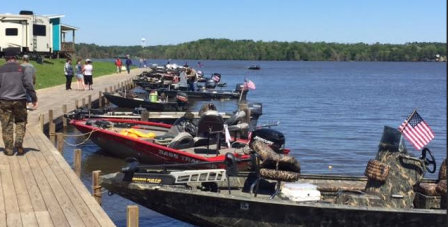 Boats line the boardwalk at D’Arbonne Pointe. Boats that had veterans fishing in them flew the American flag.