Two of those anglers – Kevin Jones and Billy Don Surface, saw our Union Parish lake for the first time two days ago. They brought in seven big crappie weighing 14.52 pounds to take the lead in the 75-team Crappie Masters Louisiana State Championship tournament after day one. They were one of four teams from Missouri in the top ten and one of three teams that had two pound average fish.

The tournament concludes with another day of fishing Saturday with weigh-in beginning around 3 p.m. at D’Arbonne Pointe.  Anglers can weigh in early, but have to be off the water by 3:30 and in the weigh-in line by 4. The first day leaders will weigh in last Saturday.

Josh Gowan, who recently moved to Farmerville from Missouri, and his partner Josh Chipman of Missouri are in second with 14.18, including the day’s big crappie at 2.47. Overall, 23 teams had a big crappie weighing over two pounds. Several of the top teams had more than one.

Terry Richards and Casey Rayner of West Monroe are in third place with 14.05, making them the third team of the day to average two pounds per fish.

The only other local anglers in the top ten were Nicholas Young and Jock Young of Farmerville in ninth with 12.81.

Here’s the Day One story line:  If the fish would have been as tight-lipped as the anglers were following Day One, nobody would have caught a fish. Maybe a couple of nibbles, but that’s it.

“Can you tell me anything about what you were doing that helped you get in the lead today?”, I asked.

“Talk to us tomorrow,” said Jones when I asked if they could tell me anything about what they were doing.

“Yes”, Surface said. A minute later, he added,  “I can tell you we are catching fish where two ditches come together.” That pretty well narrows it down to one end of the lake or the other.

Fishermen are apparently all catching fish deep and a combination of jigs and shiners are working. The bite was tougher today than it has been for more than a week, with rising barometric pressure and yet another cold front earlier this week pushing the fish out of the urge to spawn, at least for a while.

You can hardly blame the leaders or any of the fishermen for being quiet. Many of the anglers are already fishing within a long cast of each other and with a $6,000 check on the line for the winner’s, nobody wants to give away any secrets. The second place team will pocket $3,500 and cash prizes will go to the top 15. Besides cash prizes, anglers are also fishing for points to qualify for the Crappie Masters Nationals to be held later this year.

Canadian angler and TV host Karl “Krappie King” Kalonka and Tennessee partner Tim Blackley are fourth with 13.83; David Cox and Steve Hockett from Missouri are fifth with 13.62; Travis Lepley and David Bishop of Iowa are sixth with 13.40; and Alan Carter and Tony Sheppard of Kentucky are seventh with 12.99.

Jeff Riddle and Loren Nelms of Tennessee are eighth with 12.88 and Paul Alpers and Brian McGhee of Missouri are tenth with 12.78. 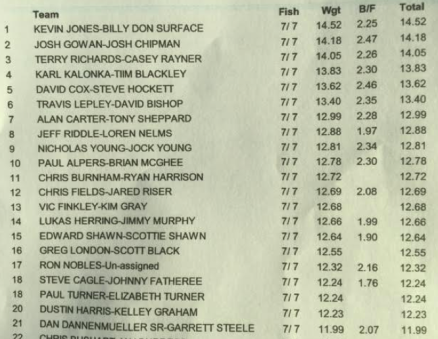 Check back with lakedarbonnelife.com, your source for Lake D’Arbonne outdoor news, tomorrow to find out who the winners are and more!

ULM BASS ANGLERS HOLD ON TO LEAD IN HOUMA —

HOUMA, La. — Tyler Stewart and Nick Joiner from the University of Louisiana-Monroe managed a solid five-bass limit during Friday’s second round of the Carhartt Bassmaster College Series Central Regional presented by Bass Pro Shops on the Atchafalaya Basin.

After wrangling 17 pounds, 9 ounces on Day 1, Stewart and Joiner added 9-9 Friday — and with a two-day total of 27-2, they will carry a 4-pound, 1-ounce advantage into Championship Saturday.  Although they didn’t boast a big bag Friday, the teammates from ULM said they didn’t explore all of their spots and are hoping that fish management will pay off Saturday.

“We did save some areas that we found in practice,” Stewart said. “We don’t know if they will be big-fish areas, but we are probably going to start on one of them tomorrow. In 15 minutes during practice, we had about 10 pounds in there. So with more time, we may be able to catch more than that.”

The Warhawk teammates will need to stay focused, with the rest of the top five also from Louisiana. Marcus Kliebert and Francis Robichaux from nearby Nicholls State University caught four bass that weighed 12-5 Friday and jumped from sixth to second, just 4-1 back of the leaders.

Louisiana Tech anglers Gunner Durrett and Austin Watkins moved up into fourth place with 22-5 for the first two days.