If last weekend’s Majestic tournament was any indication, contestants in this weekend’s Louisiana Peach Festival Bass Tournament on Lake D’Arbonne can expect some peachy catches! The big fish have been biting and so that should give contestants a good shot at good catches.

The best catch will earn a guaranteed $1,000 first prize. One place will be paid for every 10 boats over 50. Entry fee is $90 per team. The tournament is hosted by the North Central Bass Anglers. All the rules are posted below. You can get more information at Wood Marine in Ruston.

Fishing in the tournament is from 8 p.m. Saturday night, June 27, until 7 a.m. Sunday morning. Mike and Randy Brister of Ruston are the defending champs, with a catch of 21.51 last year. Ivan Daigs and Matt Willis of Ruston had big bass at 7.52.

There’s an optional $10 big bass pot with 100% payback. The weigh-in will be at D’Arbonne Pointe’s fantastic new facility.

*Five fish limit per team. Twelve inch minimum length (fish will be measured with mouth closed and tail pinched straight). Teams must begin culling when sixth fish is landed. At no time should there be more than five fish in a team’s live well. There will be a 1/2 pound penalty for every dead fish weighed in. Only largemouth & Kentucky bass may be weighed. After fish are weighed in all contestants are responsible for the release of their fish.
*Only artificial lures may be used with the exception of pork trailers. No trolling with combustion engine.
*Contestants cannot leave the boat to land a fish or access another body of water. No fishing within 50 yards of another contestant who is anchored or tied with trolling motor out of the water, unless permission is granted.
*Life jackets must be worn while combustion engine is running. Running lights must be on during dark hours if combustion engine is running. All motorboats anchored in navigable waterways of this state shall exhibit a white three hundred sixty degree stern light between the hours of sunset to sunrise. This light shall be the highest such light to be exhibited.
*In case of tie, prizes will be split evenly.
*Contestants 16 years of age or younger must fish with a parent or legal guardian with written consent.
*All state, federal, local, and Coast Guard regulations must be followed.
*No alcoholic beverages during tournament hours. Poor sportsmanship conduct will be grounds for disqualification.
*Launch anywhere on Lake D’Arbonne after 6:00 PM, but do not begin fishing until 8:00 PM. Trailering to weigh-in is allowed. Weigh-in will be held at D’Arbonne Pointe on Old Hwy 15 across from Folley Beach at 7:00 AM sharp. Boats arriving late will be disqualified. Tournament Director will keep official time. There is no tournament water off limits period.
*All contestants must submit to a polygraph test if asked to by the Tournament Director. Failure to abide by tournament rules may result in disqualification.
*Protest must be submitted in writing by 7:15 AM. The Tournament Director’s decisions are final in all tournament matters. 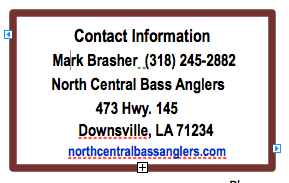