I wish I could…

Days like Monday afternoon — when the barometric pressure is falling between thunderstorms, the wind has stopped and left the water slick as glass and you find a spot where you can breathe among the lake bugs — I wish I could freeze that last 30 minutes or so of days like that. It was one of those afternoons where every time you threw out a cricket or worm, you caught a nice bluegill. I don’t know where they have been or where they have gone now, but for that 30 minutes, they were in the same place I was. They hit just about everything down to the smallest tidbit of a worm. 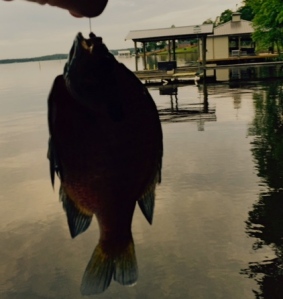 Then, right before dark, they quit. But I knew what was coming next. At least I hoped.

Catfish. They moved in and the bream moved out. But that was okay.

I caught five before I broke off my little bream hook and switched reels. I threw a big red worm up in about two feet of water and there was a big splash like a four-pound bass. But it was a three-pound catfish. After quite a battle, he slipped into the landing net, then the fish box to be turned into supper for Tuesday night.

Then it was over. Not because I wasn’t willing, or because the fish weren’t willing. It was dark.

And that “hole” in the mass of bugs, well, it closed around me. And even a dummy like me knows that with a mess of fish in hand, it’s time to head for the screen porch and catch my breath. Yes, catch my breath. When the action’s like that, I still get excited as a little kid in a candy store.

I wouldn’t have it any other way!