Louisiana will be well represented as the Carhartt Bassmaster College Series National Championship is headed to Chatuge Reservoir out of Hiawassee and Young Harris, Ga, this weekend. Included in the field will be eight anglers from ULM, four from Louisiana Tech and two from Delta Community College.

It’s a complicated, grueling format, but in the end, not only is the national title in college bass fishing up for grabs, but one lucky (and skilled) young bass fisherman will have a berth in THE BASSMaster Classic!

The National Championship will run July 31 through Aug. 2. The entire field will compete on Thursday, July 31, and Friday, Aug. 2, and the Top 5 teams will fish for the National Team Champion title on Saturday, Aug. 2. After the championship round, the Top 4 teams will be divided up, and each angler will be placed individually into an eight-angler bracket. They will fish for three days, Aug. 3-5, in a single elimination format until only one remains. The winning angler will qualify for the 2015 Bassmaster Classic on Lake Hartwell in South Carolina.

With so much at stake, collegiate anglers are doing all they can to prepare for what could be a 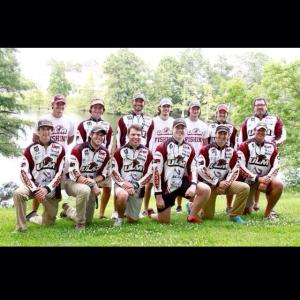 grueling nine days straight on the water, including three practice days prior to the start of competition. Fortunately, Chatuge Reservoir lies in the mountains of northeast Georgia, so the temperatures are not as unbearable as they are in most parts of the country in July and August.

We will keep you up with the winners here, so stay tuned. Here’s the lineup who have qualified from Louisiana:

The University of Arkansas team of Jonny Schultz of Maumelle, Ark., and Sam Horn, Fort Smith, Ark., won the tournament with a five-bass limit weighing 19 pounds, 5 ounces. The victory earned the club $2,000 and advanced the team to the FLW College Fishing Southern Conference Invitational tournament on Sam Rayburn Reservoir.  Alford and Stewart finished fourth with 11-15.

“We grew up around these parts,” said Horn, a freshman majoring in Chemical Engineering. “We knew the summer patterns and we knew to have a shot at winning you had to be out deep.” The pair said they caught all of their fish on a Sexy Shad-colored Strike King 6XD crankbait and that all of their spots were in 10 to 15 feet of water. The top 15 teams advanced to the 2014 FLW College Fishing Southern Conference Invitational.

« Weather and fishing are hot!
Take me to the river… »