Wednesday was just for practice. Thursday was Media Day. Friday morning at daylight,  55 of the top professional bass tournament fishermen go head to head with each other and the elusive Mr. Bass to see who will be crowned champion of the 2014 BASSMaster Classic.

This year’s title match is being held on Lake Guntersville in Alabama. The winner will take home a whopping trophy, the title of World’s Best Bass Fisherman and a little extra incentive, a $300,000 first place check. Most former winners suggest that after winning the Classic, the total payout including sponsorships, endorsements and prize money top the $1 million mark. Guntersville is a 75-year-old, 69,000-acre, 70-mile long Tennessee River reservoir which is well known for producing huge catches in big-time bass tournaments. 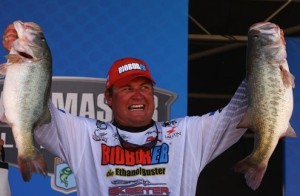 Louisiana has one fishermen who qualified for the big event, Cliff Crochet of Pierre Part. Yes, that’s the same town that “Swamp People” star Troy Landry is from.

As usual fishermen in the Classic were closed mouthed going into Friday’s first day of competition, the first of three days of competition. However, those on site reported that none of the anglers really got  “dialed in” and the Classic may be more up for grabs than ever before.

This year’s weather has thrown the anglers a curve ball. This fantastic bass fishery usually has a lot of grass and the fish have moved shallow. But colder weather has kept them out further, much like our lakes here in north Louisiana. Still, any day the big ones could start moving up. Still, high winds and rains a that blew through our area today will hit there tomorrow.  That won’t be any fun. In fact, don’t be suprised if there isn’t some type of delay or disruption getting the anglers on the lake.

But history has shown these guys are going to catch bass. Somebody’s going to blow it out of the water and pull a muscle hoisting the big trophy…and check.

You can find out more than you ever wanted to know about a fishing tournament over the next few days at: