It was exactly 50 years Sunday when on Oct. 13, 1963, the Lake D’Arbonne dam and lake were officially dedicated just south of Farmerville. There was no water. No fishing piers. No camps or lake houses. No fish. Just a big concrete spillway sitting out in the middle of nowhere.  And of course, hope. No, make that dreams.

“FARMERVILLE — D’Arbonne Lake, a 16,000 acre project that will cost $7 million, was dedicated near here Sunday, years after it was first dreamed of. About 2,000 persons gathered on the dusty banks of D’Arbonne to hear Gov. Jimmie H. Davis explain that it was impossible to measure the lake’s value to the Union Parish area.”

The Governor was right. It is impossible to measure, and if we take care of it the next 50 years like folks

have the first 50, it will remain that way.

“I hope I’ll be able to come back sometime and sit on the bank with a fishing pole,” the Governor added.

I don’t know if he ever got to do that or not, but I’m glad I did. Here are some more highlights from that first “official” day when the lake was dedicated and the spillway gates closed: 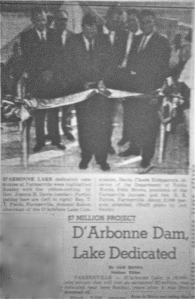 * Department of Public Works Director Claude Kirkpatrick said, “This lake is one of the wisest investments Louisiana ever made. Future generations will be indebted to the men who carried the load for this project.”

* The lake won’t be filled to capacity for several months. With about 200 miles of shoreline, the lake will stretch from the dam south of Farmerville through the hilly pine country of Union and Lincoln Parish.

* Rep. T.T. Fields, Rep. L.D. Napper, Sen. B.R. Patton, Rep. Lawrence Gibbs and others sponsored the legislation in 1956 that kicked off the project. Also on the list of supporters — Gov. Earl K. Long, who signed the original legislation, and Lorris M. Wimberly, former Director of Public Works. The elected officials credited the Union Parish Police Jury, the Jaycees and the Farmerville Lions Club for assistance in keeping the project moving, sometimes against strong odds.

* The public works department cleared 800 acres of timberland at the dam site for water sports. Another 300 acres was cleared near the Ruston Highway. The rest of the lake was left as it was to enhance fishing.

Happy Birthday, Lake D’Arbonne! Glad I got to come to the party! 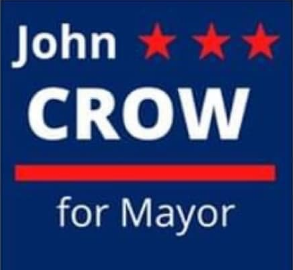