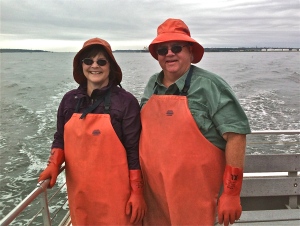 I’ve always heard that Maine had some big crawfish, so this past week my wife and I went to check it out. Sure enough, they do!  And we had a blast going on a lobster boat to catch some, eat them and enjoy a part of the country we’ve never been to before. Folks up in Maine call these pound to two pound crawdads “Lobstah“…

One of the highlights of our week-long trip was going out on the “Lucky Catch” Lobster Boat, baiting and running traps and then bringing in our catch to be steamed at the Portland Lobster Company. It’s something I’ve always wanted to do and frankly, the trip exceeded our expectations.  I love lobster and fresh lobster is just like fresh fish — when you bring them in right out of the water, cook them and eat them, the flavor is 100% better than any other way. 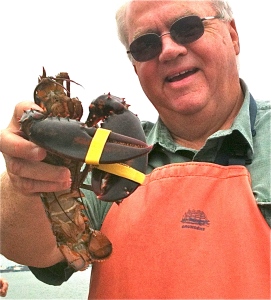 Lobster is expensive in any area restaurants — $25-$35 usually. But in Portland right on the harbor? They sell them for $3.99 a pound live!  Wow. The average lobster dinner there?  $15 with the trimmings. It’s big business, too. One of the huge covered buildings on the docks had five olympic size swimming pools — all filled with live lobsters being prepared for shipping. Don’t tell my doctor, but I ate lobster every day (sometimes twice) on our trip. Whole steamed lobster, lobster rolls, lobster salad, lobster bisque, more whole steamed lobster, lobster stew, and yes, they even make lobster omelets for breakfast. They are pretty high in cholesterol and you can’t take a bite without dipping it in melted butter. Unless you eat a lobster roll (a pound of chunks of lobster meat on a grilled hot dog bun). Then you cover it with mayo. I know. It’s oatmeal for a week now… maybe that will help.

I did try some of the favorite local fish — Haddock.  I didn’t tell anybody that they were spelling it wrong…  And for some reason, everyone we met knew we weren’t from there, even though I was careful to not use any “r’s” in my speech — cah, hahbah, fah, lobstah, etc. as we went he-ah and tha-ah up and down the coast. We even drove down to Boston for a day where I took part in a re-enactment of the Boston Tea Pah-ty. Man, that felt good.

Thanks for humoring me. I know this doesn’t have much to do with north Louisiana fishing, but can you imagine the size of the chinquapins you could catch with THESE CRAWDADS!!! 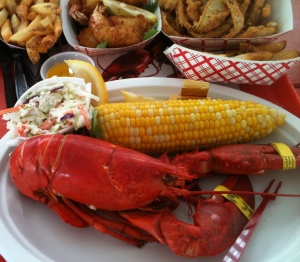 One thought on “Chasing Maine Crawdads”