Some old men pass the time sitting on the porch in the rocking chair. Some gather around the coffee pot and solve the world’s problems every morning. Some sit on the bench and watch the People of Wally World go by.  Poor folks. The lucky ones are like the Letter Sumos. They are living and fishing large! The Sumos are a group of old ____ (word meaning rude gaseous event goes here) who take a serious approach to solving 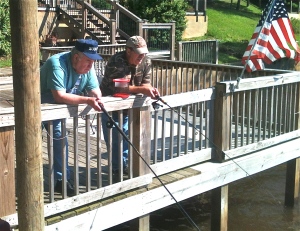 serious problems, like world hunger.  Mostly our own, I have to admit. And yes, that’s why we call each other Sumos. Get over it. For security reasons, we don’t use names for identification purposes — just letters.

Most of us used to work together. Some showed up “at work” and drew a paycheck. But now we take our fishing responsibilities seriously, even those that can only take part by text messages and photos, Like Dr. C and W. For some reason, they are both still working to help pay off the growing national debt. I guess we should call them Patriots.

This year’s trip was totally successful. Success is measured by one factor and one factor only — we catch enough fish to eat fish and we leave full. What else would you expect from a Sumo. This year there were only four of us at the boat dock fishing tournament, but with a little help from me (big H) catching some fish the day before, we had a good feast.  There is only one rule for the tournament. You eat what you catch.

My cousin “p” did his part and caught enough to eat. That included two big old catfish. So did I. Sumo “h” (that’s little h) didn’t catch anything but a hard time. Since he’s the elder statesumo of our group, I’ll respect him here and not tell you that by now he thinks a fish fry consists only of french fries, ketchup, purple onion and hushpuppies. And don’t forget, sweet tea. I hesitate to mention that we had TEA at the PARTY because it could lead to unnecessary attention from the IRS. As for h, well, we started fishing at 7:30 a.m. and he didn’t show up until 9ish.  Heavy on the ish. Then he complained because there were only six or seven crickets left in the box. But we keep him anyway. Actually, he’s probably caught more fish in his lifetime than the rest of us, but we can’t let him know we know that. 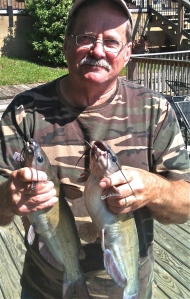 But as usual, those of us that did catch fish shared. And as usual, h claimed to have a serious injury which kept him from catching fish. This year it was a “six-inch splinter” in his pole-holding hand. It may have been six inches long, but we could hardly see it with our tri-focals.  He tried to claim it came from my dock, but for legal purposes, I saw him rubbing on his hand on the way TO the boat dock, so it was obviously a previously existing condition. But it is one of our Christian ministries to look out for him, so I won’t say anything bad. Further info for the legal record, he was witnessed eating filets with both hands, injured or not…

And “K“, as well.  I didn’t tell you about K”? He just shows up when the fish is caught, cleaned, fried and on the platter. Kind of like a blister. He shows up when the work is done. And he’s not really a Sumo because he’s way too skinny. So skinny, in fact, that if he was a fish, we’d probably throw him back. But he’s one of us, too, so we have to claim him except when he is in Hawaii on vacation. Besides, he has a letter from somebody in the State Government that says he is.

Like many old men organizations, Sumo rules prevent me from saying anything nice about anybody. That’s just the way it is. But we are great friends and have a great time. And that’s what makes it fun.

One thought on “Fishing Large”