It happens every spring. You can count on it. As sure as Dogwoods bloom, the grass needs mowing and the birds nest, it’s on.

For the most part, it goes unnoticed by the public. But those few who witness the fierce competition will tell you that the Super Bowl, the Indy 500 and the World Series pale in comparison. The dictionary defines “to do battle” as “to fight or struggle tenaciously to achieve something important.” Let’s be blunt — tenacious is a little too soft of a word here.

It’s the annual one-on-one bream tournament between my friend and former neighbor, Pam Turner, and me. Doesn’t that sound exciting? Ha! You just haven’t been there. We both love fishing and some have mentioned in passing that both of us are what you might call “slightly competitive” on the water.

My wife is always the official referee and fish counter.  She usually sits in a lawn chair a safe distance away. Pam’s husband, Dan stands back with the First Aid kit in hand and pretends to bass fish or something. He won’t even come near until the bait is used up. Fishing for relaxation? Yeah, right. And you believe football is played just for fun, right?

The 2013 grand event took place this past weekend. It was a bit chilly on the fisherpeople, but the water 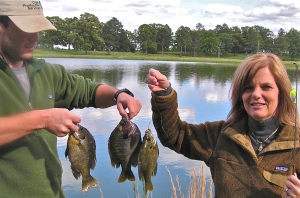 Pam Turner gets a hand showing off some of her bream from her son and tournament helper Matthew.

was warm enough for the bream to do their part. Besides. They didn’t stand a chance. Yes, modestly, speaking, we are both just that good, especially when the tournament is on the line. Just like most of our previous contests, the tournament didn’t end until we ran out of bait.

I managed to bait my hook and get it in the water first. In spite of the fact that there was a whole lake in front of us, Pam immediately said, “You’re in my spot”.

“Yeah? I don’t see anybody’s name on it,” I said.  Then she threw out her bait in another direction and immediately caught the first fish, a whopper bluegill.

“Okay, I’m not having a lot of fun here”, Pam said as she gave me a dirty look and tried to unwrap the line from around the end of her mini-cast. I might point out that It became tangled as she hurried over to reclaim “her spot” while I was visiting the cricket box.

It went back and forth, much like other famous battles. Waterloo, Midway, Gettysburg, Little Big Horn, the Battle for Middle Earth….Luke Skywalker vs. Darth Vader…. those come to mind.  You get the picture.

It was really a good afternoon for fishing. Soon, we were down to the last of the 50 crickets and showing a bit of weakness, I gave in and let her fish with the few remaining crickets. I fished with a couple of wax worms that we brought along for insurance. The fish didn’t like them too much.

Soon the cricket box was empty and Pam had apparently made a great comeback.  “It’s a tie”, said my wife, the scorekeeper. Oh, well. We had kept a good mess to cook, including a handful of really big ones,  and threw the rest back.

Just for the record, unlike most competitions, this one always officially ends in a tie. There is usually a little backroom chatter about who really caught the most and the largest. And there is some concern that the scorekeeper is a bit prejudiced for the lady in the tournament, but no matter. The “tie” allows us to remain friends and come back to fish another day.

And isn’t that what it’s all about (not counting the fish fry, of course….)?

« OK, what would you do?
Tainter gate update »