Quack Pack is Back, Jack (tonight!)

On the day that the new season of “Duck Dynasty” season debuts, we have some disturbing news.

Can you imagine hearing these words:  “Phil Robertson, report to makeup“.  Makeup? Surely they meant black and green camo face paint. Phil Robertson to makeup? The Duck Commander? Smoothing out the rough spots on the old forehead with powder and combing out the old gray beard?  It can’t be.  The man I once interviewed who vowed never to even own a lawnmower (he wasn’t worried about the grass — the frost would get it); said he never owned a suit and never missed a day of duck season is now wearing makeup?

Maybe it is for the best for the star of the amazingly popular TV show Duck Dynasty. Hey, Jack. I can get over it. I love 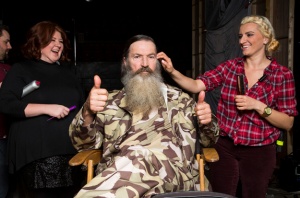 the show and it will be just ducky with me. l will be in front of the tube tonight just like millions of others loving and laughing every minute. The stars of A&E’s most watched series will be back tonight at 9 p.m. central and they can do just about anything they want. I’m sure they will. I just hope Hollywood doesn’t change the real Robertsons. I don’t think it will.

Some of what’s to come this season on Duck Dynasty: Willie tries to lose weight for his high school reunion, Jase and Willie take Missy and Korie deer hunting, the guys rough it in the woods for opening day of duck season, and Si looks for a canine companion. There must be a new line of hunting camo, as is apparent in the show’s promo photos. We’ll just have to wait and see. I haven’t missed an episode and I won’t unless something monumental happens. Even then, I’ll have the DVR rolling and make sure I have a duck tape of the show!

NOTE:  I’ve had the chance to share a few moments talking to

Phil in the past.  I’ll share some of those moments in the days ahead as the show gets going again. Here’s the first: Question: Phil, what would you NOT want to be?

Phil: “A minnow. Ever wonder why a minnow exists? What’s he good for? He’s good for bigger fish to eat. That’s all.  He’s on the bottom. Everybody is after him. Out of all the things I’d never want to be, it’s a minnow.”