Running the river for ba$$

How many bass can you catch out of three million dollars worth of bass boats in one place? Well, we will see this weekend on the Ouachita River. The bass on the Ouachita River should think pretty highly of themselves the next four days. The top 200 pro fishermen who qualified from five divisions across the country will be on the Ouachita River for the season finale FLW EverStart Series Championship presented by Castrol. Competition began this morning. The circuit is named after Forrest L Wood, fishing legend and founder of Ranger Boats.

The economic impact of such a tournament is stunning. Start with the fact that these 200 anglers will be fishing (two to a boat) in rigs that cost at least $30,000 each. Do the math. That’s $3 million+ in bass boats alone. You can bet every angler has at least $1,000 worth of fishing gear, so that’s another $200,000 thrown in the mix. Most of that has been spent before they get here. But locally, a bucket of bucks will be spent on motels, food, gas, more gas, even more gas, fish baits and even more gas as the anglers can run almost 100 miles of the river from the Felsenthal locks north to the Columbia locks south. The EverStart Series tournament on the Ouachita River is being hosted by the Monroe/West Monroe Convention & Visitors Bureau. Good move.

The winning pro will walk away with $50,000 and the chance for a new Ranger boat with a 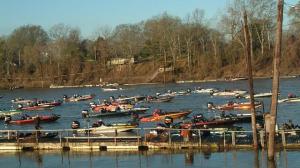 FLW anglers on the Ouachita.
PHOTO BY FLW – Jennifer Simmons

Our area is represented by one qualifier, pro Jim Dillard of Monroe who is sponsored by Hawaiian Punch. In an interview with FLW, he gave the following predictions: “It’s going to be tough fishing,” said Jim Dillard “We had a cold front move in very quickly and I think it shocked a lot of fish, I know it shocked me. However, it should start warming up and it looks like conditions will be favorable by the time the tournament gets started. It’s not all that easy to catch keeper fish or 2-pounders,” Dillard continued. “But don’t be fooled. There is an abundance of fish in the river, they may not be the size that you want, but they are there. The best thing to do is keep your bait wet and keep grinding it out. The thing is that you can catch fish anywhere; on the river, in the oxbows or in the back water.

Dillard suggested most of the fishermen will be using crankbaits in about six foot of water. The river is full of active shad this time of year and the bass will be filling up for the upcoming winter. Dillard also said that flipping jigs and worms will also produce, but the crankbait will probably be the key lure. He also suggested that getting 15 pounds or so every day will be what it takes to win.

Anglers will take off from Forsythe Park at 7:30 each morning. Thursday and Friday’s weigh-in will be held at the park beginning at 3:30 p.m. The final weigh-ins Saturday and Sunday’s will be held at Walmart on Louisville Ave. in Monroe beginning at 4 p.m. Fans will be treated to the FLW Outdoors Expo at the Walmart on Saturday and Sunday from noon to 4 p.m. prior to the final weigh-ins. The Expo includes Ranger boat simulators, the opportunity to interact with professional anglers, enjoy interactive games, activities and giveaways provided by sponsors, and fans can learn more about the sport of fishing and other outdoor activities. All activities are free and open to the public.