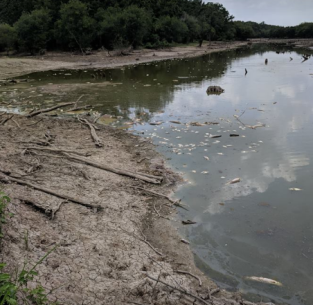 Chad Thompson posted this on Facebook Monday evening: “Rode up in the game reserve this afternoon to the dump on Frank Lapere Creek and this is what I found. Fish kill as far as you can see.”

Set aside politics, trust and communication issues and all that and let’s get down to an important question regarding the drawdown of the Ouachita River.

How will it affect fish populations?

Of course, nobody knows that for sure. And while they aren’t the most important question about this big, beautiful river, the following are certainly worth asking to some people who would know. Or could give an educated guess. So I did. Here’s a summary of what they said:

1. How will this drawdown affect fishing in the Ouachita River? What will be the differences in river lakes, bayous and the river itself?

The drawdown has basically shut down access to fishing and river flow between Felsenthal and Riverton. Most all public boat ramps are non-usable and blocked.  The fast fall has created quite an upset condition in waters that were stable and thermally stratified.  Net effect is a short term water quality much less than it was across the river system. That stresses fish and makes fish feel less active and can possible be fatal. There will be some conditions that are very difficult on fish in this heat, especially in areas cut off from the main river.

2. Will the increase in water temps in shallower areas and lack of flow create a potential fish kill in some areas?

The answer to that is yes. As shown in the photo above, some scattered kills are already occuring. Most are what we would call “thrash fish”. But fish kills should be minor in most areas. However, in upstream waters that have some degree of depth that get cut off from the river, things could be worse.  Oxygen levels in those areas are an issue. in the main river itself, they should not be unless the drawdown is continued over a prolonged period of time. Nobody is sure if that will happen or not. Very little information has been made public.

In most larger areas fish are simply making their way downstream to suitable water. Then they will go back upstream as water rises.  Again, the the potential for fish kills there also increases the longer the water stays down.  Fresh, cooler water from heavy rains would offer some temporary relief, but not for long. And once again, those areas that are cut off from the river could be hardest hit.

That’s about it. The long term effects on fishing should be fairly limited, but could look pretty nasty in some areas. The scary part is that there’s always the chance that Corps of Engineers decides that repairing the Riverton Lock just isn’t worth the expense, or that they will keep it down for several long, hot, dry months. I don’t like to think that is even a possibility.

But the Ouachita has become a poster-child in the news media in recent years for Corps budget battles — more money is always needed. To be honest, it’s the same thing that is going on at Cheniere Lake right now. Repairs to the road and spillway from flooding keep getting delayed because of budgets or lack thereof. There’s a real possibility that if the public doesn’t stay on elected officials to move that project along, our kids will be calling it Cheniere Brake one day instead of Cheniere Lake.

This river drawdown could be used as an “I told you so”  tactic to show people what would happen if we didn’t get our politicians to give the Corps the money they want to maintain the river locks and dams. I hope that would not happen, but in a day and age where some so-called government leaders and servants threaten to end LSU football, stop feeding the needy or even kick our poor grandmas out of the nursing home to squeeze more money out of taxpayers, who would be surprised?

Stay tuned. Pray for the best! But stay vigilant.

« Something was “miss”ing
Two days on the Ouachita »

One thought on “River drawdown will impact fish”