I turned 65 years old this week. I am a pack rat. I also have things that are much older than 65 years. Most of it has something to do with fishing.  “Old Week“.  Here’s part 3 of a three-part series. Hope you enjoy. 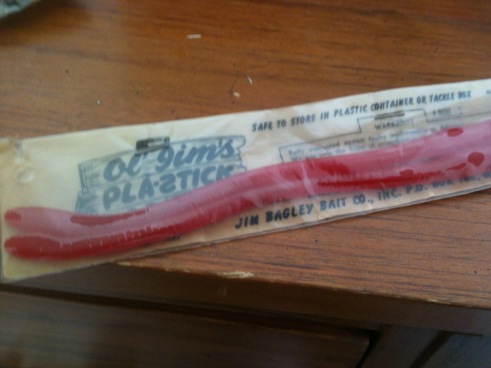 In the late 1970’s and 80’s, the first-ever high school bass tournaments were held right here on Lake D’Arbonne. They were the brainchild of yours truly and sponsored by the News-Star. One of the biggest supporters of that event was the Jim Bagley Bait Company and the late Jim Bagley himself. He actually flew his helicopter up to Monroe two different years to take part in the seminar that we put on the Thursday before the event for the high schoolers. He was also best buddies with the late J.D. McKeithen of Monroe, another champion of the high school event.

Bagley became  famous for their Balsa B lures, made from Balsa wood for better vibration in the water, which made bass gulp them up like prime rib. They also cost like prime rib back in the day because they were a more expensive lure to make.  Those things cost nearly two bucks apiece back in the day! Today, they are about $9 apiece.

I really enjoyed talking with Bagley. In our discussions of old baits, Jim told me about the Ol’ Jim’s Pla-Stick worm. I was thrilled one day shortly after that discussion when I got a pack of the big eight-inch red worms in the mail from Jim in Winter Haven, Fla. I still have it today (that’s it in the photo above). He also sent me a huge box of new Balsa B lures, including a couple of prototypes that never even hit the market.

Jim purchased the dormant Dean Pork Rind Co. in 1954. Those were the first “lures” he ever sold. From what I can gather, the Ol Jim Pla-Stick worm was the first one he actually designed and put on the market himself, not far behind selling the rinds that came from Dean.  I tried to find out more. I exhausted my ability to learn more about the lure, even going all the way to today’s president of Bagley Bait Company, Don Hulstrand. He wasn’t able to find out anything, either.

“I am afraid there is no one left here at Bagley that can help in your research,” Don told me. “It was my own understanding that the first baits packed and marketed by Jim Bagley were the rinds that he packed in a small glass jar – packaging that was pretty standard for that era.  I can only guess that those pre-dated the plastic worms in the package that you have.”

If anybody out there knows anything different for sure, let me know. 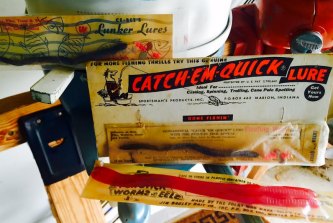 beads and the hooks already laced through the worm. There were several major brands, but none more popular than the Catch-Em-Quick lure. They came in mostly two colors – earthworm red or black. Most bass fishermen swore by black.

In 1949,  Nick Creme poured the first plastic worm in his Akron, Ohio, basement, using a mold created from a live nightcrawler. Later on, a mistake in color mixing led to the first purple worms. You know where it went from there with all kinds of sizes, shapes, colors, scents and actions.

The original “Lunker Lures” were even plastic worms, not buzz baits. Believe it or not, the original worms were designed as much for pike and walleye as they were for bass. Catch-Em-Quick was made in Marion, Indiana and Lunker Lures came from Durham, North Carolina.

An early advertisement for Catch-Em-Quick, pointing out they are good for casting, spinning, trolling or cane pole fishing. My grandpa George often tied one on a 16-foot hand cut bamboo cane pole and tied the lure on about four feet of line. He would walk around the edges of ponds and slowly drag the worm around grass and stumps. It worked. 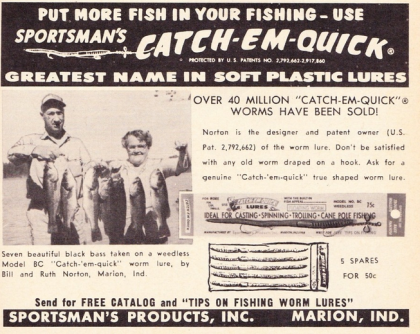