If you haven’t heard the Katie Knight’s “Lake D’Arbonne” country song, you need to. It’s a Classic. You can click on the icon on this page’s middle column, click on “all music” then on Lake D’arbonne” and give it a listen.

Saturday, I was living the song.

The alarm went off early. I gathered up my hunting gear and went to a new stand up on the Struttin’ Buck HC. It was my first hunt ever there and I was excited with the 51 degree temperature reading on the truck’s rear-view mirror. In my excitement, I hastily unloaded the 4-wheeler and headed about 25 yards toward the woods WITHOUT my rifle. It didn’t take long to retrieve it.

I got the deer stand and settled in well before nautical twilight. It wasn’t long after daylight when a 4-inch spike eased out of the woods and down the little woods road. I could barely make out the little antlers and made the decision to let him pass. I don’t mind shooting a doe because I mainly deer hunt to get some good eating. Like it or not, that’s the way I roll. But I don’t like shooting little bucks. So he got a pass.

About 15 minutes later, a bigger deer, medium sized 4-point, took pretty much the same path. He gave me a good broadside shot at about 60 yards. I took the safety off, took a deep breath, aimed the crosshairs, but then started doing some crazy deer dreamer’s math in my head. First it was a two, then it was a four….what if just another 15 minutes it doubled again — an eight point? More points, more meat….So I waited. And waited. And waited. No other deer. I climbed out about 11 and headed home.

The day was just getting started, though.  A couple of hours later, I was cleaning a good little mess of crappie — just enough for Sunday night supper. There are advantages to living on the lake! Did I mention living the song? 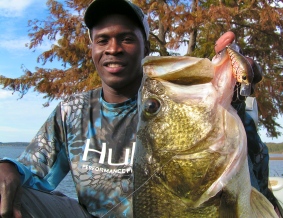 Those put away, I got a text from local bass fisherman and Lincoln Parish Sheriff’s Deputy Sontus Mitchell. I’m writing a feature article about Sontus and his knack for catching big bass in an upcoming magazine article and told him to let me know when he was on some good ones. He was. His largest was a 7-7. He ended up winning the “Media Bass” tournament on D’Arbonne with five fish weighing 21 pounds.

Got some great photos and fishing tips from this outstanding fisherman. I’ll share more on that later. But I must tell you, I DID NOT get real, real close to the big bass to take the picture you see here. Honest. Hey, I’m a fisherman. Would I stretch the truth? If you can figure out politics, you can figure out this one…

Back home again, I ended up with just enough time to add a little gasoline to the 4-wheeler, take a shower, chow down on some elephant butt nachos (okay, it was pork butt) and watch the thrilling LSU-Alabama game. That one didn’t come out like I would have preferred but was a good one. The trash REDfish won. I went to bed thinking “thank goodness there aren’t referees in deer hunting and fishing”. And hey, the tailgate was great. As I always say, “We may not play good, but we will always eat good.”

“Hey, tell the catfish we’ll catch them all later“….Sing it again, Katie.